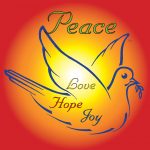 ‘Peace’ came to life following an inspirational trip to Israel and Egypt. CarolLee Miles, Executive Producer of the CD, had worked as a Tour Director/Cruise Host for many years to escort groups around the world when she found herself searching for peace in her personal life – a journey perhaps many human beings share at one time or another. In February 1996 she accompanied a group of friends on one of Dr. Jim Farley’s pilgrimages to the Holy Land.

In preparing for the trip and praying for peace while driving on Interstate 25 toward Ft. Collins, CO, she was given the words to a poem entitled ‘Peace’ and hastily wrote them on a pad in her car. Continuing on the journey, she also prayed for inner peace as she visited the Western Wall in Jerusalem. During that trip, a bomb went off and shook the hotel windows where the group stayed. What Miles heard when she opened the window to her room was a ‘song of peace’ – muted voices praying at the nearby Wall while a bird sang outside.

Returning home from the memorable trip, writing prolific poetry became an obsession – a creative writing outlet she had never thought about before. After she recited the ‘Peace Poem’ on a cruise ship in Alaska that August, a man named Jeff Norman suggested the poem should be put to song by his father-in-law in CA who has a recording studio. As the poetry continued, so did various unexpected meetings with people involved in the music industry. The consensus of opinion was the same: these are music lyrics. Hence, ‘Peace’ was born in 1999.

The eighteen-song CD contains Miles’s lyrics set to music in various musical genres including styles ranging from Gospel to Country, Rhythm and Blues to Folk, Jazz to Pop. Four different composers from around the U.S. combined their talents to transform the poems into song.

Ted Perlman and Peggi Blu’s ‘Peace’ became what Miles calls the “granddaddy recording” on the eighteen-song CD entitled ‘Peace.’ Ted Perlman contributed three songs total from his CA studio while the other fifteen were produced in about six months time at various locations around the U.S. Eddie Wilson, a master of music himself, finished the CD in the Caravel Studio in Branson, MO, just three hours South of where Miles was born and raised.

In Miles’s words, “I felt as though we birthed 18 babies in a very short labor period. I’m very thankful for all those who came together in an unprecedented effort to bring about a masterpiece that has touched people’s lives.”

The CD entitled ‘Peace’ is now making it’s way around the world. The CD journey started when it was used in Vietnamese orphanages to quiet the children through an organization called Children of Peace International (COPI). Copies have also gone to Haiti, India, several countries in Africa, Philippines, Romania, Iran, and Guatemala. Miles personally carried it to Cambodia, Mexico and Russia in an effort to bring peace to others. Music is definitely a universal language, according to Miles, and she donates a percentage of every sale to non-profit organizations that work toward ending human suffering.

Joy in the Ocean

Teach Me to Fly