CarolLee Miles began her career in the travel and tourism industry with Ports of Call Travel Club in Denver, CO, in 1986. By 1990, she had 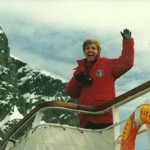 already escorted tour groups on all seven continents. While she found land tours fascinating, she quickly discovered a passion for cruise ships.

In 1993 Miles received her professional tour director certification from the International Tour Management Institute in San Francisco, CA, and continued working as a self-titled “Ambassador of Peace” while she developed an insatiable appetite for helping people around the world heal emotionally from personal terrorist attack — be it health related, abuse related, grief related, 9/11 related or job related.

Professional Cruise Hosting became her career emphasis. It inspired CarolLee to begin writing while she explored the oceans and rivers of the world. In 1999, she became Executive Producer of a CD entitled Peace, which reflects feelings she experienced during a trip to Israel in 1996, when a bomb shook the hotel windows where her tour group stayed, and beyond.

In her newest creative endeavor, “A Chosen Career in Cruise Hosting,” CarolLee combines the latest developments and technology within the Cruise Industry with memoirs of her life’s journey. She also shares secrets both professionally and personally in her book. Her simple message is: First identify your passion, then — Dream it! Speak it! Write it! Live it! While you’re at it, try her definition of L-U-C-K: Love Until Creation Knocks.

Ms. Miles holds a B.A. degree from the University of Northern Colorado, Greeley, CO, and lives in Florida.

Click here to book your cruise to any destination!